IMOVING FOOTBALL ORGANISES THE 2017 MONEYGRAM CUP OF NATIONS IN MADRID

Imovingfootball has reached an agreement with ZA: MEDIA, the official coordinator of MoneyGram in Europe, to organise the 2017 MoneyGrand Cup of Nations in Madrid the next summer. U17 grassroots football teams from all over Europe will participate in this international tournament, and the final will be held in the city of Warsaw during the month of August.

Madrid is one of the venues of the tournament, where between 8 and 16 federated teams from all over Spain will participate in a qualifying round for the Warsaw Grand Final. This event will take place on 11st June in the Ciudad del Fútbol de la Rozas in the Royal Spanish Football Federation.

The MoneyGram Cup of Nations focuses on football as a unifier of different cultures, regardless of the language and origin of people.

Any U17 team can register for the tournament, as long as it is a federated team.

Registrations can be made through the website www.cupofnations.eu/es, where the 12 teams participating in the tournament will be selected by voting.

Once the voting is closed, and on the given day, the 12 teams will compete against each other in matches of 25 minutes. The winner will go to Warsaw to play in the final against the other 7 winning European teams.

MoneyGram is an institution with a great experience in the world of sport. It has sponsored the 2016 Cup of Nations in Germany, to European clubs like the Schalke 04 & Paris St. Germain. At present, it is a partner of Dallas FC (Major League Soccer) and sponsor of 2017 EHF European Championships and the ICC Cricket World Cup.

Imoving Football becomes the partner of MoneyGram in Spain and is pleased to be able to bring this tournament to the city of Madrid, making possible for the grassroots football of our country to take part in a competition that aims to bring people and the youth from different cultures, removing barriers through the sport that we love the most: football. 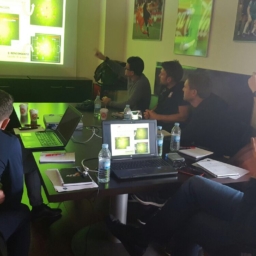 Imfootball has collaborated with the Foundation of the Royal Spanish Football Association (FRFEF) in the coordination of a training stay for English football coaches in Madrid.